Fresh off the buzz of attending my first tweet-up, I noticed a tweet about a blogging class being given the next morning by Missy Caulk, Michigan's own online real estate superstar. Plus special ActiveRain guest Bob Stewart was going to be speaking. This was something not to be missed. 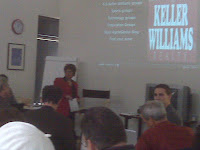 The next morning, the room was packed and overflowing. Not only were agents from her company there, but several of us from the Twitterverse were as well, including Edward Vielmetti, a well-known local blogger who 'live-blogged' the session. He had found out about it by reading a tweet just that morning! The two hours went by quickly with everyone furiously taking notes and a few of us tweeting (including the photo to the left which appeared on my photo blog). Many of those in attendance were just getting started and Missy's message was to be authentic, transparent, and personal. Bob demonstrated how easy it is to get started on ActiveRain. From Edward's precise notes and real-time tweets to Missy's sage advice, the seminar was a "happening". The icing on the cake was meeting people face-to-face for the first time.